China & South Korea aren’t too pleased with it. Paris Hilton and Ghostface Killah love it. Some say it marks the end of venture capital as we know it.

For better or for worse, initial coin offerings (ICOs) have been consistently topping headlines with a new controversy or record-breaking raise every week for the past year. To raise money through an ICO, you have to first create a digital token, not dissimilar from a share in a IPO. These tokens are then sold for cryptocurrency, typically Ether or Bitcoin, which in turn can be sold for fiat currency to fund start-up growth.1

Speculators are drawn to asset class for its risk/return profile. My hunch is that these are not “smart money” investors; I’m willing to bet that a majority of participants are early speculators in other cryptocurrencies looking to repeat the successes of their first gamble. 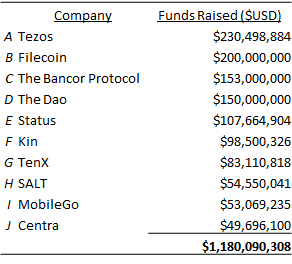 The above chart graphs the market cap of Ether in relation to the top ten ICOs by $USD raised. It is no coincidence that the peaks in Ether’s value are coincident with record-breaking raises.

The reason why this is gaining so much attention amongst founders is that it allows you to literally raise millions of dollars in seconds, directly tapping into a global investor base without retaining a costly intermediary like brokers, investment bankers, or venture capitalists.

I get the appeal of ICOs. I mean, start-up fundraising is a long and taxing process. Anything that lets a founder spend less time fundraising and more time on their start-up should be a good thing. After all, one would think that since ICO investors are all willing adults who aren’t being coerced, there’s no reason to not take their money, right? I don’t think so – here’s why:

As it stands, ICOs exist in a bit of a wild west. With the exception of China and South Korea – who have taken the heavy-handed approach of banning all ICOs – governments around the world have yet to carve out specific regulations for token issuances. The key issue is determining whether the token is a security. Securities offerings are a tightly regulated area of finance and are costly, requiring the hiring of financial and legal advisors.

In lieu of specific guidance, in its post-mortem of the DAO, the SEC outlined principles2 against which one can determine whether a token constitutes a security. Essentially, if there is:

Then it is considered a security and thus, subject to all relevant regulation. Assuming you’re looking to stay on the right side of the law, if your token is deemed a security, a majority of the aforementioned benefits fade away. For instance, you’ll have to either file a prospectus (and hire a banker) and effectively be subject to all the regulations associated with an IPO. Alternatively, you could go down the exemption route but you’ll be greatly limiting the scope of potential investors and need to work with exempt market dealers.

With that being said, does it make sense for anyone to pursue ICOs? The way I see it, ICOs are still a viable means of fundraising for start-ups with the right product.

Not all tokens are created equal. As a digital asset, the developer has considerable latitude in structuring the functionality of a token. Securitized tokens are tokens masquerading as shares. They’re designed to represent ownership, as evidenced through voting rights or a right to proceeds.

Example: the DAO – a (failed) attempt at creating a decentralized venture capital fund – issued DAO tokens in its ICO, raising over over 10.73M Ether ($150M+ USD) in its offering. Each token entitled the token holder to a vote and potential return on investment. The intention of the DAO was to democratise access to venture capital investments. Token holders would review and vote on a series of investment proposals. If a proposal receives enough “yes” votes, the DAO would automatically invest its funds in the investee. If the investee generates any Ether (i.e. becomes profitable), proceeds would then flow back to the DAO tokenholders, providing them with a return on investment. Deficiencies in its programming were exploited by hackers on June 17, 2016, putting an end to the project and creating a great deal of drama in the crypto-world.3

Utility tokens are basically paid API keys. Instead of representing a claim to ownership, utility tokens can be redeemed for specific products or services in the start-up’s ecosystem. While the rules are still amorphous, the SEC’s publication seems to hint that they recognize a difference between securitized and utility tokens, with the latter being less likely to be subject to securities laws.

Example: Filecoin is a decentralized storage network that takes advantage of excess hard drive capacity on its users’ computers. Users can earn tokens by renting out unused storage space. Filecoin tokens can then either be sold on the secondary market or redeemed for storage. Essentially, Filecoin is a decentralized Dropbox, where instead of storing all your files on Dropbox’s centralized servers, your files are distributed across several hard drives and computers across the world.

What makes tokens valuable is its ability to augment network effects. A network effect exists when the value of a product or service increases with the number of people using it. The classic example is the telephone – as more people buy the product, the value of telephones increase as it allows you to connect with a larger user base. Network effects give rise to winner-takes-all markets and are the reason why we only have one major search engine and one social media site. When combined with high switching costs, network effects create powerful barriers to entry that allow incumbents to create and sustain monopolistic environments.

Tokens take this a step further. Utility tokens are an alignment mechanism that allow for financial value to accrue to the user. What drives the accrual of value is the relationship between token supply and token demand. ICOs create a limited number of tokens for a product. As the product matures and grows its userbase, demand for the product (and consequently, token) will outpace the growth in token supply, leading to a higher market clearing price for the token.

Take Kin for example. Kin, created by Kik, is the utility token of Kik’s digital services ecosystem. The goal is to evolve Kik from a simple messaging application to an ecosystem that allows users to purchase “experiences” (i.e. access to celebrity-hosted chat rooms, premium media content, chat bots that allow you to order pizza, etc.) from other users on the platform. The unit of transaction in this ecosystem is the Kin token. This marketplace clearly benefits from traditional network effects; every time a new user joins, the utility of marketplace increases as this adds to the list of creators and/or purchasers of “experiences”. By integrating the token to the core of its offering, the financial value of Kin also increases with the addition of each user, creating financial benefits for token holders.

This matters because it creates alignment between the interests of the token holder and the company. By allowing them to be directly financially vested in the company’s success, companies can foster highly engaged userbases with an almost fanatical obsession with the product.

Start-ups that are able to design businesses that integrate token offerings with the core of its product should strongly consider ICO raises. A forced attempt at mashing together inappropriate business models (centralized models with no network effects) with token offerings is recipe for disaster. Chances are, the token that results from such artificial combination will likely be considered a security under the eyes of the law.

Now that we’ve know who should consider ICOs as an avenue for funding, the next question is when? Are ICOs an alternative to angel and seed funding? Or are they best suited for as a tool to catalyze product adoption in later stage companies? Stayed tuned next week where I’ll share my thoughts on this topic, and more.